Thanks to Alibi's writer Leigh Hile for her wonderful review of our first exhibit. She really understands the nature of our project! Below is the article in full, reprinted from "Alibi", Nov, 29. Laura Liccardi photo
Belinda Edwards says she was called to the desert. And though she almost gave up on the move to New Mexico, “A little voice said to me, Don't worry, you're coming,” she says. “I left a job. I sold my house. This is my magical place.”
Edwards, who’s from Santa Barbara, Calif., is one of four artists whose work composes the group exhibit, “Creation / Migration: Stories of the Journey” on display Downtown at the FreeStyle Gallery. Laura Liccardi photo
Belinda Edwards, "Origin"
The women combined their efforts to create the centerpiece of the exhibition, a large basket. Miller-Kusz's layer begins the basket with willows from her home, strips of her old paintings and clothesline like her mother and grandmother used. Filling out Tsosie’s section are palm fronds and yucca pods, which respectively represent Florida, where her parents lived the last years of their lives, and New Mexico, where she has settled. Caulton used paintings from the beginning of her career and fishing line, embodying her connection to water. Edwards’ layer finishes the basket with more yucca seeds, symbolizing life, death, rebirth and Mother Earth.
Miller-Kusz says these days, the creative process just flows. “When you get to be at this stage of life—and none of us are saying which stage that is exactly,” she adds slyly, “you just turn the faucet and it just pours right out. You don't need to worry too much about what your voice is anymore.”

“I left a job. I sold my house. This is my magical place.”
Belinda Edwards
Tsosie agrees, saying at her age, she can be who she really is, “not someone's mother, not someone's wife.”
The artists dug deep into their family histories and ancestral origins in an exploration of how the movement and stories of their predecessors have shaped their identities. To map these intricate trails, they unearthed personal memories and oral family histories. They collected artifacts from ancestors. They researched journals, letters and stories in old newspapers. They consulted family trees and genealogy websites. And, perhaps most intriguingly, they used DNA analysis to trace their deeper backgrounds. Harriette Tsosie’s “Migration”
The show is grounded in research and hard facts. “We're not just mystical artists floating off into the netherworld,” jokes Miller-Kusz. “We all have that interest in scientific inquiry.” The interplay between legend and reality, between where we come from and where we think we come from, is at the heart of Creation / Migration. “It became a dialogue between myth and science,” explains Tsosie, “And we were interested in where myth and science met and clashed.” Ultimately, she says, maybe we don’t have to choose. “Science is sort of explaining how, and maybe the myths are explaining why.” Both questions—not one or the other—get to the truth of who we are.
The revelations about their DNA will continue to inform future incarnations of Creation / Migration—a project which, like the artists’ personal journeys, is an ever-evolving, unfolding process. Edwards, for example, discovered that she has origins in three different regions of Africa. Now she’s learning about artistic traditions in each of those cultures and comparing them to her style, hoping to explore whether her artistic expression is predetermined by genetics.

“We’re not just mystical artists floating off into the netherworld. We all have that interest in scientific inquiry.”
Betsie Miller-Krusz
But on a genetic level, like all humans, there’s little difference between the four women, who share common origins in ancient Mesopotamia. “I think that having our DNA and knowing that we all started in the same place is part of the collaboration,” says Edwards. “We're family, in a sense.” And in a project that so intimately probes the relationship between family and self, past and present, that is everything.

Open Thursday through Saturday, 10 a.m. to 2 p.m.
Monday and Wednesday by appointment
freestylegallery.com
Posted by Donna Caulton at 10:19 AM No comments:

Our first Creation/Migration Artist panel discussion happened yesterday, November 17, 2012, in the midst of the beautiful exhibit at the Ralph Greene Freestyle Gallery.  Each artist expressed her deep involvement in the exhibit, the creation/migration process, the  growth of the collaborative process, and her own genetic links. Those present were receptive, expressive and participatory.  It just could not have been a better day!! 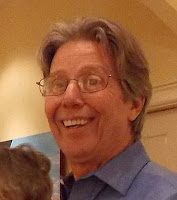 We wish to express our deep gratitude to Ralph Greene for allowing us to exhibit in his lovely gallery space.  The venue is perfect for the feeling of intimacy and family intertwined in the intent of the artworks presented.
Besides the beautiful and intimate surroundings, Ralph has been completely supportive of and enthusiastic about the exhibit, the panel, the receptions and the concepts inherent in our project. Thank you Ralph.
Please follow as Ralph progresses through a future of interesting exhibits and events. http://www.freestylegallery.com 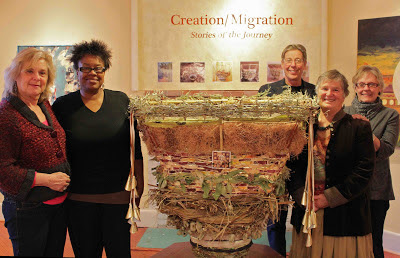 Posted by Donna Caulton at 10:21 AM No comments: 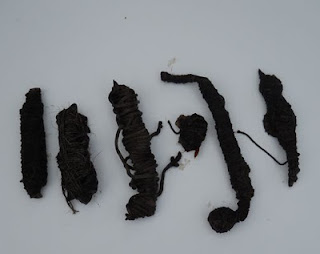 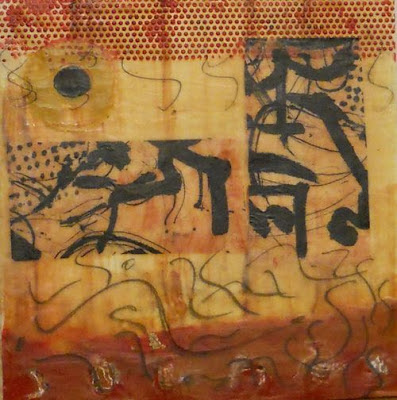 Tsosie said: "Part of the story of my own journey has been agreeing to teach the encaustic process to others. I did not initially want to do this, as I felt it would take time away from my own work.  I also feel very proprietary about my studio space: it's my personal kiva and I wasn't sure I wanted others to work there.  However, it has been a wonderful growth experience.  The teaching is reciprocal: I learn from my students."
painting by Elise Johnston 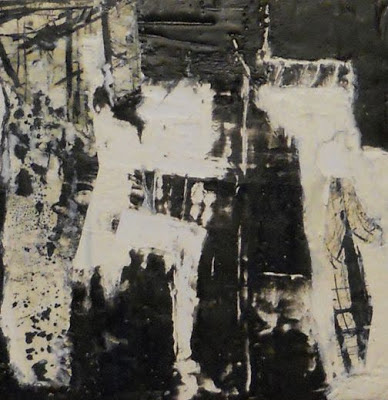 Posted by Donna Caulton at 8:29 AM No comments:


Thanks Albuquerque, for your warm welcome!

Reprinted from abqARTS and entertainment, November 2012

The Creation/Migration project is an ongoing inquiry, and each of its projected exhibitions will build on the artists’ exploration of identity issues, such as “Who am I and how did I get here?”, “Genetically speaking, is there such a thing as race?”, “What if what I learn from my scientific investigation contradicts what I have been taught or have always believed?”. 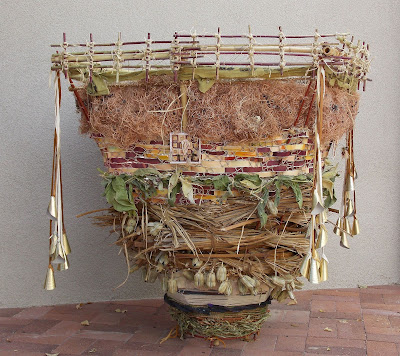 Miller-Kusz notes that the women are collaborating on an exhibition piece, the Sojourner Basket. “{It is} the actualization of our encounter,” she says.  “The basket references the form of the Apache burden baskets, but instead of carrying burdens it contains the physical and metaphoric effects we carry from our creation myths and our migratory histories.

Edwards suggested the four women have their DNA tested to find their migratory routes out of Africa. They are doing this through National Geographic’s “Genographic Project”, which has already identified seven ancient migratory paths that humans took.  Edwards is particularly interested in tracking her history back to her tribal African ancestors.

All DNA of females living today reaches back to a mitochondrial “Eve”, an ancestor of 100,000 years ago in Ethiopia, from whom we all descended,” says Edwards.

First to complete the DNA testing was painter Caulton, who was shocked by some of her results. “I knew about my Irish ancestry, but I was surprised that part of the migratory route went through Russia.” 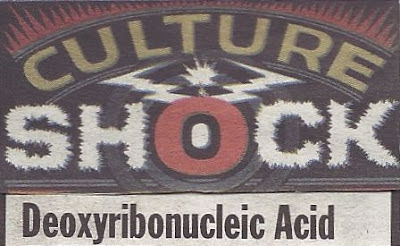 Four female artists had their DNA tested for the Freestyle Gallery’s featured exhibit, “Creation/Migration: Stories of the Journey.”  The women trace their mitochondrial DNA to discover patterns of their migration out of Africa and through the rest of the world. Each explores identity issues.

Belinda Edwards, one of the exhibitors, suggested the artists have their DNA tested as part of the National Geographic “Genographic Project.” She says her creations emerge from dreams and visions.

Betsie Miler-Kusz collaborated with the others on a “Sojourner Basket” containing creation myths and migratory histories.

Donna Caulton’s DNA traces her ancestors’ path through Ethiopia, the Middle East, Russia, and Northern Europe. Her art makes use of mandalas, and explores natural balance and cycles.

Albuquerque’s Harriette Tsosie works with universal symbols.  Her pieces juxtapose the spiritual with the physical.

We may not have any idea where we are going, but with the help of genetic testing, we can at least find out where we as human beings have been.  The exhibit will be up through Friday, Dec. 14, at 1114 Central SW.

Posted by Donna Caulton at 7:35 PM No comments: 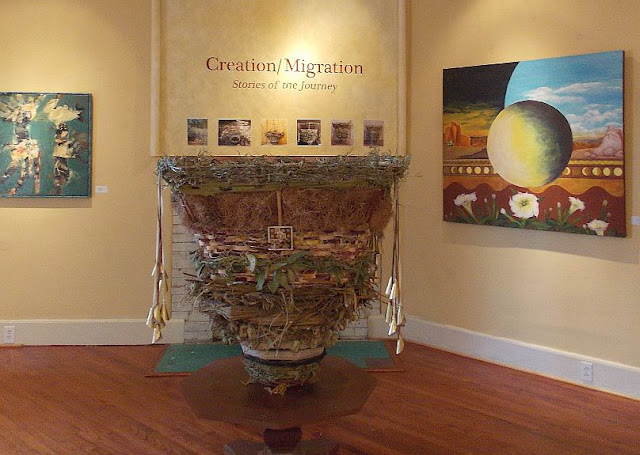 On opening night, November 2, 2012, the first exhibit of CREATION/MIGRATION: Stories of the Journey opened at Freestyle Gallery in Albuquerque.  There was a warm welcome from friends, art lovers, artists and the Albuquerque press.  The exhibit sparked enthusiasm as well as thoughtful contemplation for the journey we are making, our collaboration, our processes and our stories.

The Sojourner Basket tied together so much of our process. During the creation of it, it seemed to have its own speaking voice and the stories we gave to it no longer belong to four separate artists, but to the basket and to the creation of myth.  During the opening, the viewing audience was receptive to the processes and the ideas inherent in this collaboration. 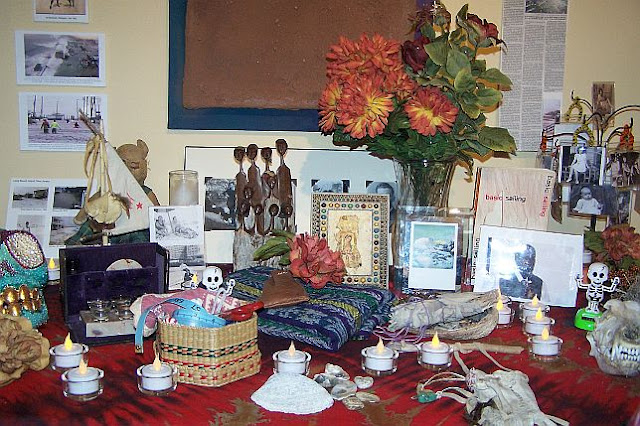 A Day of the Dead alter was an integral part of the exhibit through which we honored the journeys of our ancestors. Its intent grew in scope as Hurricane Sandy battered the east coast including many sites familiar to our families' stories.

Travel  with us through some of our exhibit: 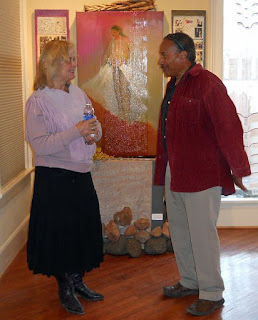 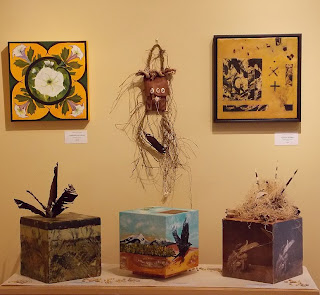 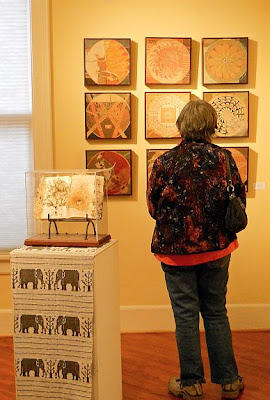 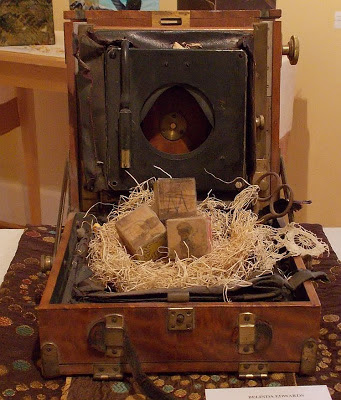 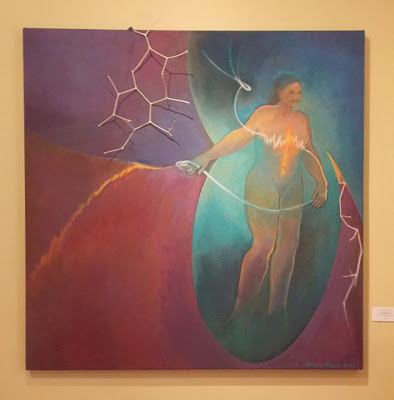 Posted by Donna Caulton at 10:57 AM No comments: 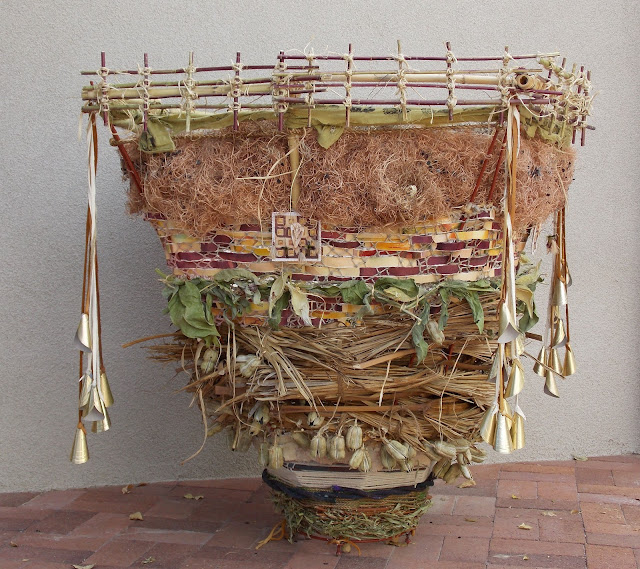 Please join us at the opening reception November 2, 5 til 7 PM
The above image, Sojourner Basket, is a collaborative piece: the work of all four artists.  The making of this and the other works of this exhibit have been transformative for us.  We look forward to sharing them with you.

In the days ahead, on this site, each of us will tell our own story of the making of this basket to include what we have learned and what parts of our lives are intertwined in the making of it. We will also share thoughts about meaning and trust we have gained in our collaborative relationship through the development of this project. Thank you for joining us.

Posted by Donna Caulton at 11:45 PM No comments: 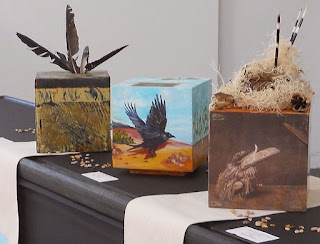 Our journeys, of which there are many, led us to New Mexico where we found one another at various times. Belinda and Harriette, in Santa Fe at the time, shared ideas and friendship for several years. Later Harriette and I met during Harriette's sojourn at Picuris Pueblo.  The three of us did our first collaboration for a show at Encaustic Art Institute in the summer of 2010.  Belinda and I were invited by Harriette, an institute founder, to enter our collaborative pieces; When Crow Mother Came, and Dawning of the Mesa.  This experience introduced us to the reality that we plan well together, have a similar sensibility around our imagery, and make collaborative work that is beautiful and cohesive. So the group began. 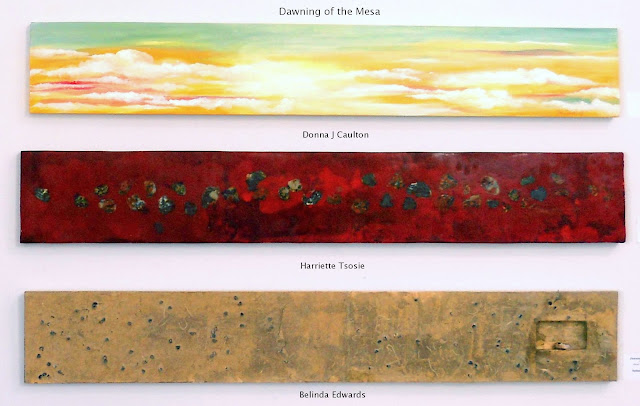 In Summer of 2011, in Santa Fe, there was a summer long, city-wide collaborative project called "Mining the Unconscious" based on the work and Redbook of the renowned psychologist, Carl Jung.  Harriette wrote the original proposal for the project, and was the organizing lead for getting the second show off the ground.
And it was really a fabulous show.  Belinda was instrumental in organizing and producing the vast array of workshops that happened in Santa Fe during the project.  I organized the volunteer activities and information  materials we used during art exhibit number 2. This is when we met the fourth member of our group, Betsie, who lives in Jemez Springs.  She was the installation expert for our exhibit, based on years of experience at San Francisco Art Museum. 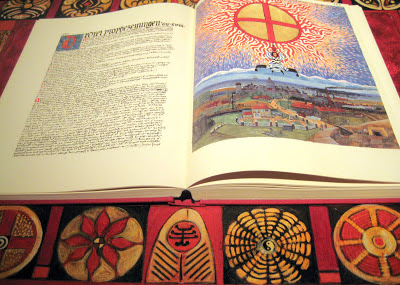 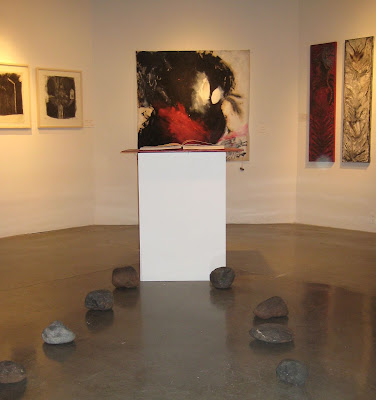 We did not make a collaborative art piece for the show, but feel the show itself to be an enormous collaboration that brought us together.  We have, since then, been working on the Creation/Migration: Stories of the Journey project.  That's another story, and we will tell you all about it as we add to this blog.
Our friendship, trust and respect for each other's work grew through each project.  We want this blog to be about that journey, as well as the individual journeys that brought us to this place in time. 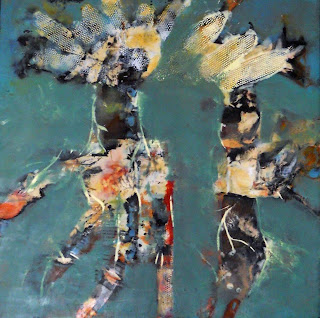 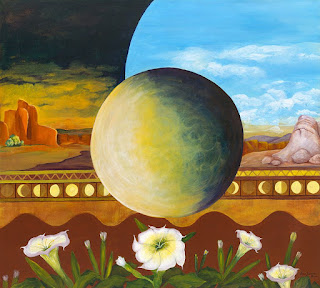 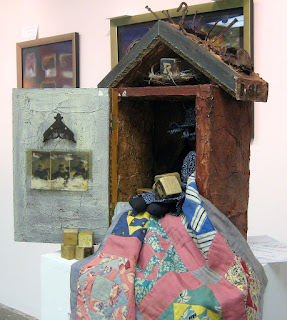 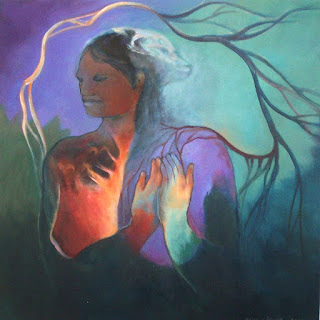