Faces of Personal "Herstory": A Collaboration

During much of this summer (2013) the Creation/Migration project has exhibited a shared art piece that lends itself well to the discussion of process in the development of collaborative artworks. The exhibit has been at the Esther Bone Library Gallery in Rio Rancho, NM. During the planning phases we knew we would be presenting the exhibit in a library setting.

In consideration of the tradition of historic figures being seen in libraries in the format of cast busts on pedestals, we decided to repeat the essence of this idea.  Each of the four artists in our group created a personage that is representative of some part of her Creation/Migration story.  Besides being thematically tied together, that connection was enhanced by having each persona also represent one of the ancient elements: Earth, Air, Fire and Water. 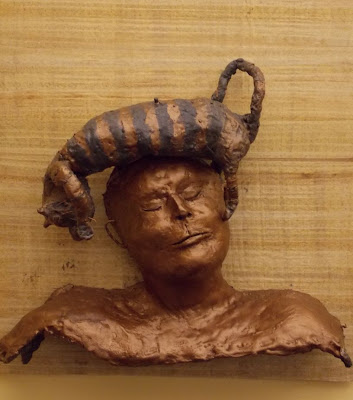 In the above photograph, on the far left in the grouping, is Harriette Tsosie's piece, "A Secret".  The cat has multiple meanings for Harriette as evidenced by the CAT symbols in her life, from Harriette's love of cats, to her love of a very particular CAT, and, by the way, note the catty expression on Harriette's cast face!

The simulated bronze finish is created through the expression of FIRE, as are the cast bronze figures of tradition.  Harriette's medium of encaustic paint utilizes the heat-melted wax to produce her surface effects and coloration, bringing the transformative affect of fire to each piece. 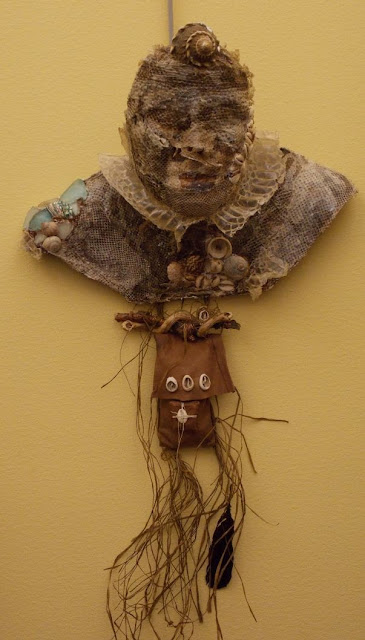 The WATER element (second from left) is brought to life in Belinda Edward's depiction of her ancestral figure. This woman speaks of the essence of her long journey from Africa. Her skin is reminiscent of underwater ripples, of whale or seal hide, of fishing nets; covered with shells and barnacles and clothing that seems more like delicate translucent jelly fish or kelp flowers, bringing the true essence of the ancient wisdom of the ocean's secrets.

And more secrets are held in the shell-studded medicine bag that dangles from her neck and the wand of life-giving messages from the nestings of sea birds, as though carried on the winds of the sea. 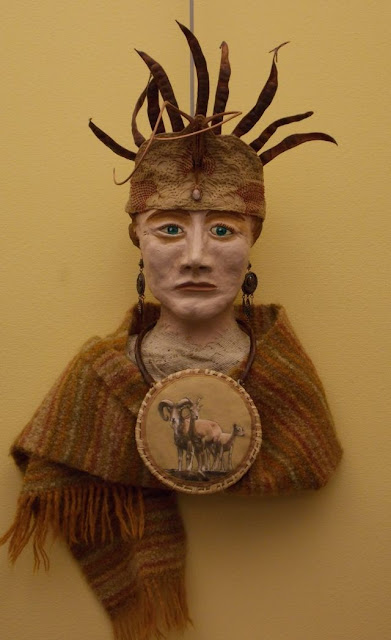 Perchta of the Alpine Forest (third from left) is Donna Caulton's tribute to her ancestry and to the EARTH element. Although her bearing is regal as the pagan goddess she represents, she is  revered and feared and as earthy as a goddess can be.

Donna has many Berthas in her German matrilineal line, but the namesake is unknown.  Perchta (an ancient name from which Bertha was derived), then, became Caulton's chosen namesake to represent the earth elements of her female ancestry.

Perchta has many faces, but the one depicted here is the goddess of weaving and guardian of the beasts. She was known to wander through the winter forests, always with spindle in hand, always watchful of the safety of the herd animals (and little children).  People were careful to leave food out for her on the cold winter nights, staying in her good graces, never willing to risk her fearful dark side, one that all pagan gods and goddesses were known to possess. 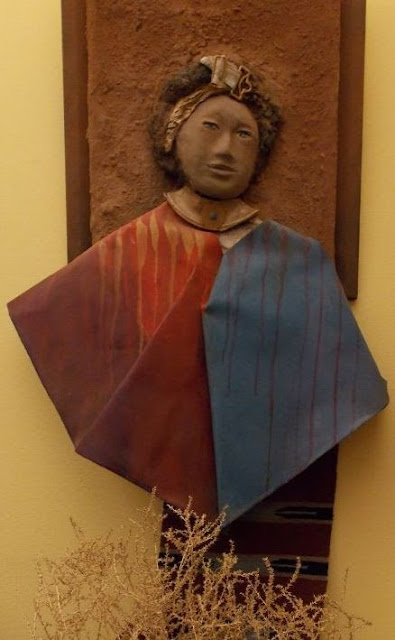 On the far right is Betsie Miller-
Kusz representation of her far matrilineal roots in Ethiopa and her near self in the Jemez Mountains of northern New Mexico.  Both are grounded in and born of earth, but carried into the present on the AIR; a seed landing here, taking root; landing there, taking root; finding herself on the path of the true sojourner.

It is a rare month that goes by that does not find Betsie in an airplane, making a landing  at one of her many points of transformation.

Each artist in this project is strongly grounded in the EARTH element.  Each of the four, however, has varying depths in the other three ancient elements; fire, water and air. Perhaps it is the earth element that allows this group to function so well within the collaborative process?

Please join us as we explore this question, among others, as panel presenters at the 2013 EncaustiCon conference this November (2013) in Santa Fe, NM.
http://www.encausticon.com/presenters
Posted by Donna Caulton at 7:25 PM No comments:

East End Arts is presenting its second annual juried exhibit, H2O.
The jurors for this national exhibition are Peter Marcelle and Bruce Helander.
The show runs August 9 through September 27, 2013.

Harriette is exhibiting her encaustic piece, "Blessed Rain", a mixed media piece with encaustic, wax and dye.  She will be at the opening reception Friday, October 9 from 5-7.  In addition to taking part in this national exhibition, Harriette has imbued a  a prayerful attitude into her recent rain paintings, in hopes of rain for her her beloved northern New Mexico, where a three year drought is seemingly coming to an end.
Posted by Donna Caulton at 7:58 AM No comments: