I was born in Los Alamos, New Mexico, during the Manhattan Project, where my physicist father was working as a graduate student. We moved back to the Midwest shortly after the end of the atomic bomb project, but the place assumed an almost mythical stature in my mind. I didn’t visit again until the 1980’s, little suspecting that I would end up living a short distance away in the Jemez Valley of Northern New Mexico, after an adult lifetime spent as an artist. So I have come full circle in my personal migration.
I grew up taking the exchange of matter and energy for granted, and it took years of painting to realize that was the real content of my imagery. I work to make the invisible visible, the unseen available to our senses. I believe this is also the charge of physics, mathematics, and genetics. We live in a time where “virtual” has become an everyday word, no longer just the vocabulary of science. Our DNA testing makes this virtual knowledge very concrete for us, as humans and as artists. My known genealogy reaches back only to the late 1800’s, coming from German, Irish, Czech, Scotch and Bohemian roots. But my cellular inheritance goes back 150,000 years to the first known ancestor, the mitochondrial Eve, and she is where I connect in my imagination to all of the human family. I like to think the large protective figure in my current paintings is directly related to her essence.
I spent many years before moving to New Mexico as a painter and muralist in San Francisco, where I was privileged to be awarded public projects and numerous exhibitions, local and international.  I traveled widely, and still do, with exhibits and murals in many parts of the world. I have often wondered if my own migration has in some sense mirrored the migration of my DNA, restless and itinerant, always ready for another adventure. During my years in San Francisco, I experienced so profoundly both the ocean and the city. But now that I am living a rural life, I find that the rhythms in my chromosomes respond even more deeply to my chosen surroundings of trees, mesas, river and mountains.
The imagery of my paintings has transformed through its own evolution, beginning with hard edge geometrics in the late 60’s, changing to landform abstractions in the 70’s, and rediscovering the human figure in the 1980’s, particularly as it related to space and geometry. In the mid-90’s, during an intense period of work and projects related to peace, a large guardian figure appeared in my paintings. She (sometimes he) has been with me ever since, visible to me only when the brush is in my hand. This earth guardian has become more defined in my time living in New Mexico, and I can only guess that I have engaged a natural force here, one which is related to our inheritance as humans. I believe our DNA predisposes us to make such images, and so mine is activated here and now, the perfect confluence of creation and migration at this stage of my life. 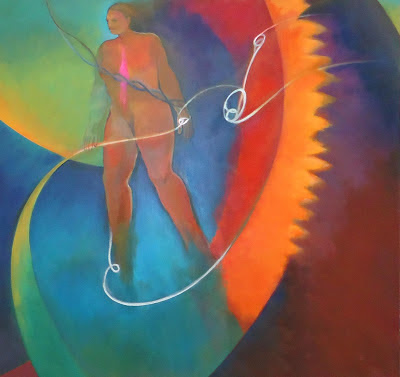 
Within the Spirals of the double helix the earth spirit coils energy in knots to bind matter into human form. 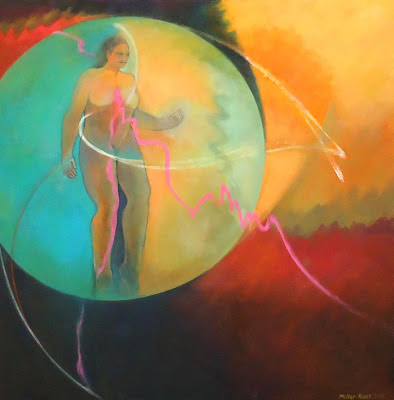 "From the Higgs to the Helix: Considering the Crossover"
Acrylic on Canvas, 60" x 60".


The guardian figure emerges from a cellular structure engaging particles from the universe to create form out of formlessness; causing a dynamic ripple in the fabric of space and time.


The protector spirit steps into the river of light, the boundary between seen and unseen, being and emptiness. A metaphor for creation, her movement across this liquid threshold implies migration through time. 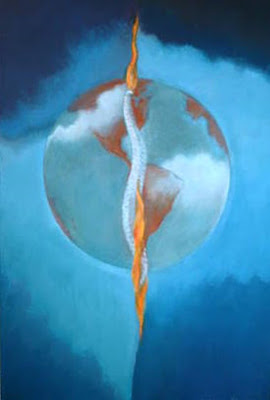 
The image of the globe, our planet, is penetrated by the human spinal cord, as earth takes on the weight of the human presence.